Cheap pay as you go phones

If something happens regularly it is the massive sale of the models of the entry range of the popular Chinese brand Xiaomi. We are referring to the “A” models, specifically the Xiaomi Redmi 9A and Xiaomi Redmi 9C models, slightly higher than the first.

We have observed this phenomenon since the 2018 launch of the Xiaomi Redmi 5A. It was a phone that sold phenomenally due to its great value for money.

Then came the 6A, 7A and 8A and all of them were best sellers in the price range 110 – 130 euros. Currently, the 9A and 9C models are on sale, which are delighting consumers interested in smartphones with basic features and affordable prices. They have been the best selling cheap pay as you go phones for 4 months in a row. 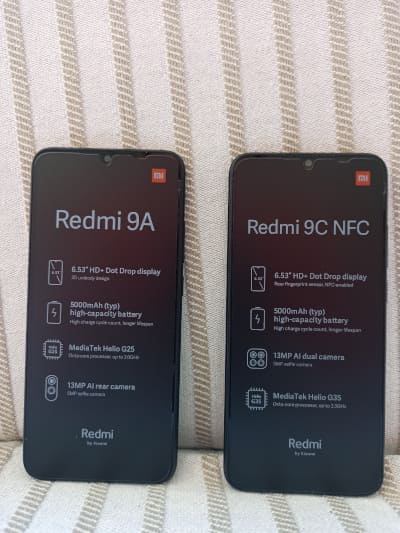 It was put on sale at the beginning of July of last year. Among the aspects that we could highlight about it is its immense 5000 mAh battery, very remarkable in a smartphone in this category. The phone has 2 GB RAM and 32 GB of storage, being able to expand it with a memory card. The camera is pretty basic as you would expect in a phone of this price. It is available in 3 colors, green being the one that has sold the most in our store.

You have Android version 10 installed and the customization layer is MIUI 12.

Getting the phone in our shop adds more benefits

We move your contacts and photos to the new device

You don’t need to worry, we deal with the set up

This model of the Chinese brand was launched at the end of August last year. It has quite a few points in common with the Xiaomi Redmi 9A but also some notable differences. Perhaps the most striking could be that this model mounts a triple main camera of 13, 5 and 2 megapixels that certainly improves the photos that the 9A takes.

There is a version of this model with 3 GB RAM and 64 GB ROM, another, which we are marketing in ORIHUELA COSTA PHONE SHOP, with 2 GB RAM and 32 storage. In both versions the storage is expandable via microSD card.

In the software section it also brings Android 10 and MIUI 12 like the Xiaomi Redmi 9A.

Two other differences that should be noted is that this model incorporates fingerprint unlocking and also incorporates an NFC antenna, which allows you to make payments in shops with your mobile.

Get in touch with Orihuela Costa Phone Shop

When Xiaomi Redmi 10A?

In a few months, the Xiaomi Redmi 10A will be available for sale, which we will surely sell in our store and will once again delight our customers.